Setting up paid time off, like sick and vacation, is one of the common questions QuickBooks users have. QuickBooks will track this information for you, keeping the running tally of what is available for each employee and printing amounts available and taken on paycheck stubs.

As a demo, we will setup a time off accrual in Employee Defaults, that way it will be the default setting every time we hire a new employee. 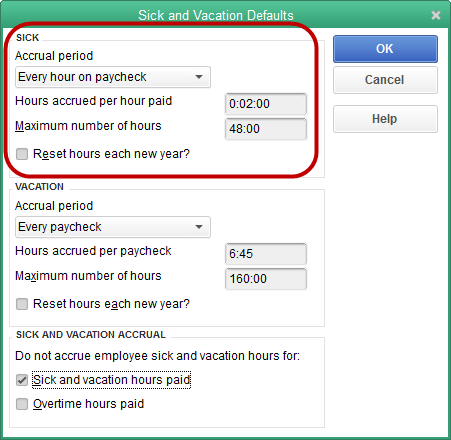 The top portion of the Sick and Vacation window is what we’ll use in this example. It measures sick time. The procedures for vacation times would be essentially the same.

In the screenshot, the accrual period is set for “Every hour on paycheck”, let’s use that.

The next field tells QuickBooks how much time to accrue for every hour worked. In the sample file for Rock Castle Construction, time is set to show in hours and minutes. This is a setting in preferences. The time could show as a decimal.

We’ll set the amount of time to accrue per paid hour as two minutes. 0:02:00. This setting will accrue sixty minutes of sick time by the time the employee has worked thirty hours.

If time showed as a decimal, this amount would show as .03333. It would be the same amount of time.

The employee will be allowed to accrue a maximum of forty-eight hours. At that point, time ceases to accrue until some hours are used, bringing the amount available below forty-eight again.

The hours will not reset each year, which is a requirement in some states.

Note the checkboxes in the bottom portion of the window. We don’t want paid sick time to accrue on sick and vacation time used, so we will make that selection here.

Above is a paycheck created for a Rock Castle employee. Note the circled areas on the right. The lower of the two shows that Gregg has accrued 2:40 in sick time for the hours on his check. That’s eighty hours times two minutes each, resulting in 160 minutes, or two hours and forty minutes, for this paycheck.

The double headed arrow points out that we have added one hour of sick time to be paid. This lowers the amount of sick time available to 1:40. That is the amount shown by the top circled area, Sick Available.

Everything seems to be calculating correctly.